No longer sleep-deprived, patient hopes his story will inspire others

For nearly two decades, Charles "Chock" Chapple suffered from sleep and breathing problems, which ultimately caused him to "run out of gas" by 5 or 6 every night. 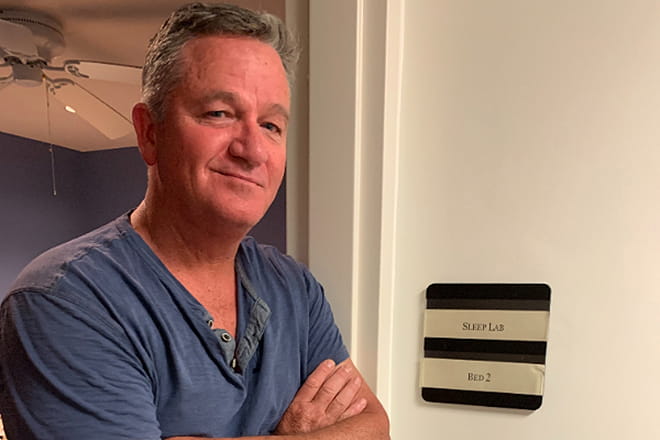 The 58-year-old Wichita insurance broker tried everything, including three unsuccessful rounds of continuous positive air pressure therapy, or CPAP, to address the issue without success and figured he'd just have to live with it.

But then Chock got some troublesome news about the upcoming renewal of his life insurance policy: He would either have to lose weight and go back on CPAP or be "rated," meaning he would have to pay significantly higher premiums for the same amount of coverage.

Having heard advertising for Inspire, an implantable upper airway stimulation device approved by the FDA in 2014 for patients who have sleep apnea and cannot tolerate CPAP, he decided to investigate that avenue instead. He looked online for providers and found that Ascension Medical Group Via Christi had a well-coordinated Inspire sleep therapy program.

He says he was immediately impressed by the thoroughness of the patient education materials and preoperative testing.

After completing a sleep study with Dr. Hugh Wong, Chock met with ENT specialist Dr. Randall Regehr for a consultation and airway exam. After careful review, the team determined that he was a good candidate for the therapy, which is covered by Medicare and most commercial insurors.

"In a worst case scenario, they could just take the implant out," reasoned Chock, determined that he was not going to go back on CPAP other than to prepare for his procedure. "The night before my implant surgery was the last night I would use it."

On June 25, Dr. Regehr implanted Chock's device during a two-hour outpatient procedure at Ascension Via Christi St. Francis. A month later, it was activated by Dr. Wong during Chock's follow-up visit to his office on Carriage Parkway.

"The first night, I felt it for a nanosecond when I turned it on, the second night not at all," says Chock, whose sleep apnea prior to the procedure was causing him to stop breathing about 38 times an hour. According to his recent 90-day post-activation sleep study, that's been reduced to just two per hour.

Chock is among the 16 patients that Dr. Regehr and Dr. Wong have implanted and activated; another 30 patients are in the process of being evaluated for the procedure. Dr. Regehr says the new therapy is the most exciting development in the field of sleep medicine that he has seen in his more than 25 years as an ENT.

"I am excited to be the first to introduce this option to patients who struggle with sleep apnea," Dr. Regehr says. "We have been having great success eliminating sleep apnea from the lives of our patients using a therapy that, for the appropriate candidate, offers a potential 'cure' for their condition."

Dr. Wong also is excited to offer patients like Chock who can't tolerate CPAP, a close-to-home treatment option. "For them, this therapy could make a life-changing and potentially even life-saving difference," he says.

Candidates must have tried CPAP without success, have a BMI under 35, and an apnea hypopnea index, or AHI, between 15 - 65. AHI measures how many times patients' sleep apnea causes them to stop breathing for a brief period of time each hour as they are sleeping. Patients who don't qualify because of their BMI may find the help they need to do so at Ascension Via Christi Weight Management.

"For me it was a no-brainer," says Chock, who had post-COVID-19 pneumonia in January and saw the procedure as an investment in his future health. "I've probably recommended it to more than 50 people already."